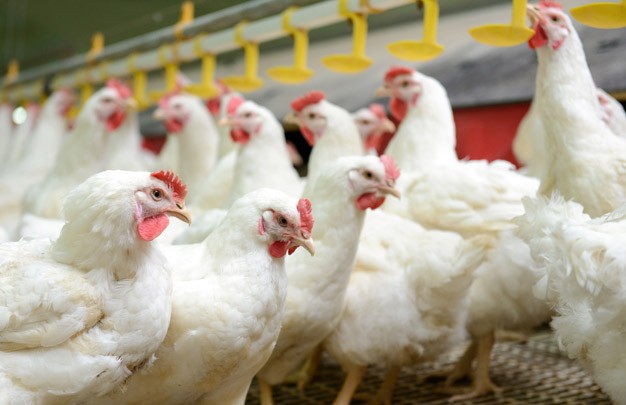 The objectives of this experiment were to evaluate the effect of dietary supplementation of nano silica composite (NSC) on productive performances, intestinal properties and egg quality of chickens.

In Exp. 1, two hundred and eighty red native chickens were randomly divided into 7 treatments × 2 replicates experimental design with 20 birds in each pen. The seven treatments diets were: Con (Corn-Soy basal diet), NSC 0.01 (with 0.01% nano silica composite), NSC 0.05 (with 0.05% NSC), NSC 0.1 (with 0.1% NSC), ENSC 0.01 (with 0.01% encapsulated nano silica composite), ENSC 0.05 (with 0.05% ENSC), and ENSC 0.1 (with 0.1% ENSC). Feed and water were provided ad libitum. Birds were weighed individually and feed consumption was recorded at 4, 8 and 12 weeks of age. Two birds from each treatment were randomly selected at the end of the growth trial for carcass traits, blood parameters, intestinal microflora and intestinal morphology test.

In Exp. 2, one hundred and forty-four Hyline Brown laying hens at 63 weeks of age were randomly divided into 6 treatments × 3 replicates experimental design with 8 birds in each replicate, and were housed in individual battery cages. The six treatments diets were: Con (Corn-Soy basal diet), NSC 0.05 (with 0.05% NSC), NSC 0.1 (with 0.1% NSC), NSC-CS 0.05 (with 0.05% encapsulated nano silica composite with chitosan), NSC-CS 0.1 (with 0.1% NSC-CS), and NSC-CMC 0.1 (with 0.1% encapsulated nano silica composite with carboxymethyl cellulose). The experiments were carried out for 5 periods (2 weeks for a period). During the experimental period, the hens were fed 110 g/hen/day and water was provided ad libitum. The lighting program was 16 hours of light per day. Eggs laid and feed consumption were recorded daily for the calculation of egg production rate, egg weight, feed intake and feed conversion ratio. Twelve eggs were collected from each treatment and were used for egg quality determination biweekly. Eggs were collected for the storage test in the final week for each period. At the end of the experiment, three hens from each treatment were randomly selected for blood parameters, intestinal microflora test and morphology of the jejunum and ileum mucosa determination.

The results of Exp. 1 showed that the NSC and ENSC groups had higher body weight than the control group at 12 weeks of age. Supplementation of 0.1% NSC diets, significantly improved feed conversion ratio than Con (P < 0.05). The abdominal fat percentage of red native chickens in the NSC and ENSC groups were significantly decreased compared to the Con group (P < 0.05).